In light of world events and the seriousness of everything many of us are going through with Covid-19 I thought it might be fun to talk about something completely off topic and also nothing related to spinal cord injury either!

The following is a tale of my adventurous and crazy exploits when I lived in China at a ripe old age of 17 and how I managed to land myself in Jail in Northern China near the border of Siberia.

I graduated high school at 17 and had no desire to rush off to college as so many do.  I decided to defer my acceptance into college for a year or so, but I had no idea where I wanted to go or what I wanted to do.  I walked into my father’s office and found one of those globes that spin around in a circle.  I closed my eyes and my finger landed on Beijing, China.

I studied a little bit of Chinese in high school, but definitely was not at a level where I could have a basic conversation.  Nonetheless, I saved the money I had, purchased a plane ticket to China, told my parents I was deferring from college, and off I went.  There really wasn’t much conversation on the matter as it was a decision I had made firmly and stuck to my guns.  Fortunately, I have the coolest parents in the world and they trusted my judgment even if they thought I was off my rocker.

There I was at 17 headed across the ocean to the other side of the world for an adventure of a lifetime.  As I landed in the country I was not sure what I was going to do, but stumbled my way to the University center of the capital, signed up for Chinese classes, made a few foreign friends, and began my adventure. 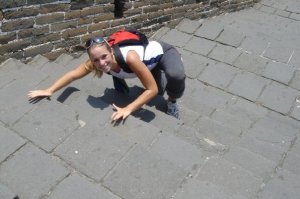 Several months passed and I realized that was not learning Chinese at the rate I should have been in the classroom.  So, I spent most my days bargaining on street corners for counterfeit Ralph Lauren clothes, drinking in bars, and signing up for kickboxing classes.

My kickboxing instructor, ironically, was an Italian kickboxer who made his way to China several years before I did.  He was 10 years older than I was and very attractive.  I loved going to this class, but the challenge was he did not speak English, I did not speak Italian, and while he spoke Chinese I could barely hold a basic conversation in the language yet.  There was clearly an attraction between the two of us and one of my Chinese friends, who spoke English, translated for us for weeks on end.  He eventually asked me out and I didn’t hesitate to say yes.  Prior to our first date I did my best trying to memorize an entire conversation in Chinese for our dinner.

I vividly remember asking all of my questions in Chinese, listening to him respond thoughtfully, but having no idea what he was saying.  Fortunately, the language of love was in our favor, but that only gets you so far after several months.  Don’t get me wrong, I love to be naked all the time, but, eventually, you really need to be able to converse with someone you are trying to date!

Fast forward a few months … Between my bargaining for counterfeit items in the marketplace to losing my inhibition of making mistakes in speaking the language through drinking at bars, and trying to date someone in a foreign language; my Chinese rapidly took off.  Before I knew it I was a full on relationship with an Italian kickboxing instructor speaking only Chinese.

After about six months of dating we decided to take a vacation together.  I voted for going to an island in the South Pacific, but he really wanted to go several hundred miles north of Beijing to a city called Harbin. Harbin is near the Russian border and is known as the “Ice City.”  Harbin is famous because every winter they build an entire city including castles, bob sleds, and buildings out of solid ice with lights inside.  It’s absolutely spectacular to see, but in order to maintain a city of ice it’s pretty damn cold.  The temperatures were averaging around -35°F each day.  You could literally walk outside and a teardrop would turn to ice on your face.  It wasn’t my idea of a relaxing vacation, but I was in love with an older man in a foreign country as a teenager.  Young and dumb I believe is the turn of phrase that comes to mind decades later.

We embarked on a 12 hour train ride from hell.  We purchased economy seats, but there were, in fact, no seats at all.  Each carriage had small little beds stacked quite high.  We were stuck on the bottom bunk and our Chinese bunkmate’s decided it would be an amusing activity for hours on end to eat sunflower seeds, and spit out the shells on the foreigners.  No, I’m not joking.  We woke up covered in discarded sunflower seed shells.

Upon arrival in Harbin, my boyfriend decided he wanted to go further north near the Russian border to a ski lodge for a few days before checking out the ice city.  Naturally, I acquiesced to his request.  I had snow boarded in the past, so I was looking forward to getting back out on the slopes.  What I didn’t factor into the equation was that because it was so cold there was no snow, but pure ice on the slopes.  We went ice snowboarding and the snowdrifts around the hotel were 7 to 8 feet high.  The snow was so high in fact that people made tunnels from the hotel to the town where you could walk through.  Now that I think about it, it probably was not the brightest idea because had one of those tunnels collapsed while we were walking under it someone may have been writing my obituary at the ripe old age of 17. 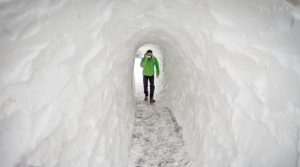 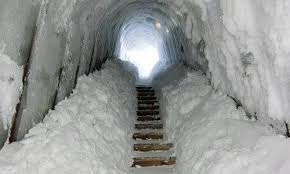 After several days we finally headed back down to Harbin to check out the ice city.

The ice city was like nothing I had experienced seen before.  We climbed up these tall castles made of ice, bobsled down them, drank hot beverages wherever we could find them, and would then hobble back to the hotel at the end of the day after feeling as though we had endured mild frostbite. 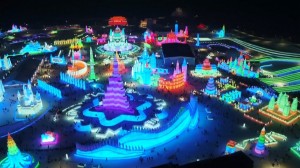 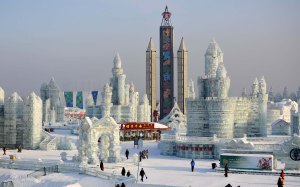 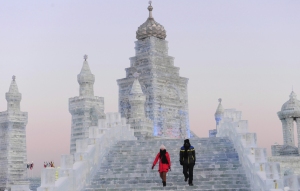 After about a week we decided to call it quits and head back to Beijing.  As I went to pay for the hotel with my credit card and passport I realized my passport was not there.  The one thing I asked the Italian to bring was my passport from Beijing.  Unbeknownst to me at the time in 2000, only 12 cities in China had ATMs for foreign debit cards.  Harbin was not one of them.  I tried to go to the bank and pull money out, but without my passport I was toast.

I was completely frantic as I did not know how we are going to get out of this mess.  The hotel manager informed me that we had a day to figure out how we were going to pay otherwise we were going to jail.  I called one of my dear friends who was shooting a movie down in Hong Kong to fly up as fast as she could and bring us money, and my passport.  I then called my parents with the few minutes left I had on my cell phone card to tell them that I was likely going to jail and if they did not hear from me in several weeks they should probably send the Calvary on my behalf.  I still can’t imagine what my mom must’ve been feeling or thinking at the time.

Anyway, off we went to jail.  I was terrified, but I knew I would eventually get out of jail as somebody would come get me whether it be my friend or my family.  I spent the better part of a week in jail with women who had been there for years and I can tell you that their crimes did not meet their punishments.  Since China is not a democratic country and does not follow the practice of due process, many of these women had simply stolen food to feed their families, and were then thrown in jail only to be forgotten about.  Fortunately, my Chinese was quite proficient and I spent my time wisely listening to all the stories of these women and what they had been through.  It was heartbreaking.

They barely fed us, we slept on straw, and the guards barely threw a glance our way.  I’m not even going to share with you with the bathroom facilities were like.  I’ll say this, there was no plumbing.  I’m sure this may have been the most terrifying of times for most people, but I couldn’t help but feeling anything but fortunate because I knew I had a family that would come get me come hell or high water.

Thankfully, my friend did arrive just in the nick of time to bribe the guards with a few hundred dollars to let us out.  I did consider letting my boyfriend stay in jail a few days longer, which would’ve only been fair, but I opted for a more lenient sentence.

When I arrived back in Beijing several days later I called my parents and I couldn’t believe how trusting they were.  They didn’t call in the cavalry, but patiently waited for my call as they trusted me to get out of the mess I had created.  I was incredibly brilliant at creating all kinds of messes for myself at that age, but I was also raised to understand the importance of being street smart.  I don’t call wolf unless I see the wolf running at me with its mouth wide open.

It was an experience of a lifetime going to jail in a foreign country for a crime that could barely be called the crime, but in a communist country and it being 20 years ago it was like the Wild West.  This is only one of my wild adventures while living in China, but probably the most eventful I can recall.

Interestingly, several months later I met an Italian fellow in Shanghai, where I moved after living in Beijing, who had a similar experience to mine, but had been left in jail for six weeks.  He did not inform the consulate, family or friends on his traveling adventures and found himself on a vacation from hell.  When I was headed to jail I did call the American consulate and they told me that they could not help me because they could not verify my identity over video chat.  Keep in mind this was back in 2001 where video chat was barely a thing.  I informed the American consulate I was a minor, but apparently that did not factor into their decision to not help me.  Things were much different in China 20 years ago as the country was only beginning to open up manufacturing on a global scale.

In any event, I survived jail at 17 in China, have a great story, learned to be even more humble and appreciative of everything around me, and now live by the motto “It could always be worse” – even with a spinal cord injury!